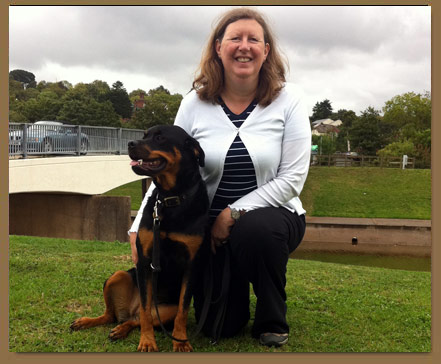 Michelle rang me about her rescue Rottweiler bitch Sadie and her
extreme aggression to other dogs.

She described how Sadie would go into an absolute frenzy each time she saw another dog, leaping up and down and almost pulling Michelle over. She had become almost un-walkable and Michelle had taken to going out very late at night or early in the morning to avoid other dogs.

On visiting them, I was able to establish a strong leadership and control programme which had immediate results and Michelle’s confidence came flooding back.

Sadie’s behaviour was transformed and we have seen no evidence of aggression from her ever since – a remarkable result. Michelle has subsequently been able to take her away on a family camping holiday without any problem at all and also entered her in an exemption dog show where she was on and off-lead in the ring without a hint of a problem.

Check out Michelle’s loose lead work with Sadie and her off-lead stuff too in the presence of another dog alongside her in the ring and as Michelle says, there were loads of other dogs at ringside too.

What an amazing change in this lovely Rottweiler.
http://youtu.be/EqPJyuu35iY


"I wanted to say a huge thank you for your help with Sadie. After 18 months of trying various different methods, the improvement in her behaviour towards other dogs, even after the first time of seeing you, has been so noticeable, even my neighbours are remarking on it. I no longer feel I need to hide from other dogs and their owners and it is so nice to be able to walk her without the embarrassment of being pulled from pillar to post by a leaping and growling dog.


I was so proud of her at the show and what made that video clip even better from my point of view is that as well as the other dogs at ringside and in the ring, there was a group of seven collies very close to her, which is where all the barking was coming from! From Sadie’s behaviour and body language, you would never know the other dogs were there, let alone that she had a serious problem not so long ago.

Thank you so much Peter. "

We are fully insured with Pet Business Insurance.

“Peter, what you achieved in two weeks with Bruno (aggressive Gsd) is brilliant. Absolutely amazing really.”
Sir Frank Barlow CBE
“What a miraculous turn around in a very short space of time. People come up to me to congratulate me on my well behaved dogs. Thank you Peter!”
Wendy Houvenaghel
Former World Champion Pursuit Cyclist
“Without Peter’s considerable expertise and support, many of these dogs would have been returned to the sanctuary.”
Tara Nirula
Ferne Animal Sanctuary
“I cannot recommend Jayne highly enough. My French Bulldog Batman loves her, I love her and you will love her too. Honestly the best thing I ever did.”
Aimee Raymond
“Jayne has a fantastic rapport with Clark, our working cocker and offers a professional, friendly service. She has a wealth of experience and top tips which she is happy to share. We thoroughly recommend her.”
Chris and Sophie Roughsedge
“Peter, I thank you for hard work, knowledge, patience and encouragement. Undoubtedly you make a huge difference. I don’t know where the canine world would be without you. I can’t thank you enough.”
Diane von Blankenstein
“We cannot recommend Ashclyst highly enough, especially as not only did we get the results we wanted for our pesky chihuahuas, but they were immediate and the support provided by them was ongoing. Thanks again Jayne.”
Jo and Chris Willis
“Without the excellent support and guidance from Jayne, we would have lost a wonderful pet and friend. We can’t thank her enough.”
John and Shane Ridley
“We were worried that our Staffie Casper might have issues with our new baby. You gave us great advice on how to reduce his status in the home before the baby arrived and he has been great with our new son ever since he came home from maternity. You also helped us make major changes in Casper’s behaviour towards other dogs and even sorted out his recall! No doubt about it Peter, you did exactly what it said on the tin!”
John Soundy
Please go to client reviews to read full and detailed testimonials of lots of happy clients.